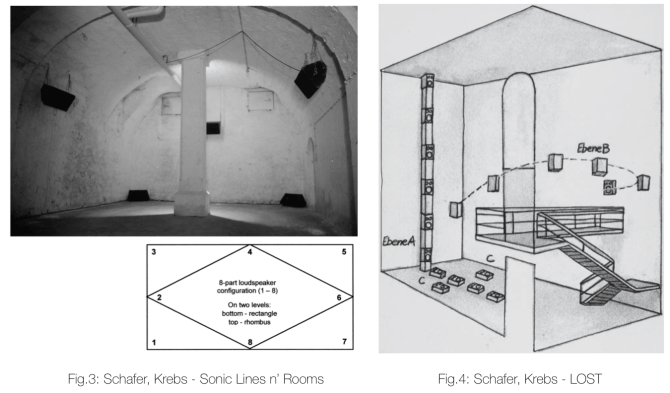 This theoretical text by Canadian sound artist Duncan MacDonald recounts the intimate relationship between space and sound diffusion in order to provide a first avenue of reflection on how this medium is a particular vector of urban investigation.

Decades ago, Canadian composer R. Murray Shafer developed important research on the study of sound within rural and urban landscapes – or as the composer called them « soundscapes ». However, within Shafer’s rubric of environmental sonic spaces, an important hierarchical judgment was made. Namely, rural spaces (also call ‘hi-fi’ by the composer) were deemed superior to urban spaces (‘lo-fi’) due to the ability of listeners to determine the sound, location, and similarity to original audition of the sounds transmitted. This model may prove useful to musicians and composers who tend to organize sound into sub-structures of consonance and highly ordered – and often repeatable – sonic cells. However, for those wishing to investigate the disordered and highly dynamic nature of urban sonic spaces, an important philosophical question emerges. How might the Noise of the city transform into something beyond an aesthetic value, but also one of social and deeply philosophical expression? Shafer’s dismissal of noisy cityscapes has prompted artists, architects, urban planners, listeners, etc. to map out cities with models differing hugely from those of the Western-classically trained Canadian music composer. Before exploring these models, it is important to come to terms with different perspectives on how we define Noise.

Sound studies scholars agree that there at least two forms of Noise worthy of definition: the first is a subjective experience (where noise to one person might be music to another, for example). In this model, Shafer’s Noise is generally associated with aesthetic value or consonance. However, while Shafer has made it clear that the purest loyalty to sound’s context (rural hi-fidelity) is aesthetically superior to the Noise of the urban, he does not unpack the context in urbanity and its invaluable contribution to said Noise. This utopian model of soundscape studies would not have been of interest to an important character in the development of Sound in Art – the Italian Futurist Luigi Russolo. More than one hundred years ago, Russolo challenged musicians and western classical notions of music (and sound); he questioned why historical European musical instruments were still being used to make music. Instead, he wondered why not use industrial machines that were roaring in the landscapes of modernity? Why not use new sounds that had not been heard in previous generations? My point in countering Shafer with Russolo is to demonstrate that what is aesthetically pleasing to one person is not necessarily of interest to another. And secondly, how might we think of the city as an instrument that can be played or structured by artists and designers?

Another important way to understand Noise, parallel to Russolo, is through the work of American author Tricia Rose. Her research dives deep into the political socio-economics of Noise with her text Black Noise: Rap Music and Black Culture in Contemporary America (1994), looking at the history of Hip Hop as a form of expression and cultural innovation for marginalized African Americans. The aesthetics of Noise, and the power of Noise as a by-product of urbanity and social struggle, are painfully clear in this text. Utilizing various strategies such as playing vinyl (instead of expensive musical instruments), MC’ing on top of the records (later becoming rap), and ‘borrowing’ electricity from municipal infrastructure, early hip hop artists were champions of what Russolo called the Art of Noises; they were resourcefully shaping a new sound out of necessity with the tools of the city – creating ‘Noise’ that could not be ignored.

Noise is not only a peripheral phenomenon in urban spaces, it is also an existentialist cry for power, recognition, and dignity. This point is extremely important when considering who is creating the Noise of modernity within urban environments. While not necessarily pleasing, consonant, or musical in historical terms, such Noise is important in understanding the reality experienced by Cairene urbanites on a daily level. It is invisible information that echoes patterns, routines, work, and the city as a dynamic machine-like system.

The second definition of Noise relates to communication theory which defines Noise as an interference between a sender (of a communication) and its receiver. Within this model, an intentional delivery of a message is mediated by the technological interface it inhabits (McLuhan’s adage that the medium is the message is appropriate here). The interference – or that which gets in the way – relates to a signal to noise ratio, or in other words, a by-product of transmission beyond the natural scope of human vocal communication. While this second definition is more technologically-centered than aesthetic, it does direct one to important concepts within Sound Studies – how often do people actively listen? And what are we listening for? And maybe most importantly, is the intentionality of the communication lost in its context, or is this a function of interference as message in itself?

Cairo is one of the loudest and most fascinating cityscapes one can find. This is a place where Noise creation is not discouraged (despite written bylaws); it is however, a place where what is being communicated must be carefully considered for political reasons. Amplified calls to prayer routinely emanating from hundreds of mosques, vehicle honks communicating a variety of messages, street vendors announcing their business with coded sound effects, the vocal bustle of the city – to puncture this cacophony one has to compete with a wide range of frequencies and decibel levels. What can we learn about this city by listening to it? What can we learn about its inhabitants? And what can we do to remix this cacophony to propose a rubric of understanding and empathy?

As alluded to earlier, listening is a foundational concept within Sound Studies. It is key to our research as artists, designers, and thinkers – guiding us to strange territories at times. Most of us are fortunate to have the physical ability to hear. However, active listening is a deeply psychological activity that compels us to direct our attention in one place or another. It is different from hearing as it is not purely a physical experience – it engages the psyche. It is an act that few engage with routinely. With this in mind, how might these foundational ideas guide us to listen to Cairo?

Just as we find in the physiology of the ear (and sympathetic vibration), so to we find with the act of listening. It is an act of sympathy and understanding. It is a process that unfolds over time, and is translated into neural information. In fact, the brain does not need much sonic information to understand its meaning. One could say the brain is as important to listening as the ears are. The process of listening is one of contemplation in an attempt to understand something external to oneself. And while the physical and psychological aspects of listening change over one’s lifetime, it is, nonetheless, an act of humility and one of understanding the limitations of an individual’s perspective in a given time. However, what happens when recording technologies are brought into the equation? Might there be multi-nodal perspectives layered within a new form of time? Can the re-mixing of urban environments conflate memory and perspective into a humanistic phenomenology of context, place, and time?

Translating the foundational ideas and functions of urban sound into art is a process of experiencing the city, listening to the city, and re-mixing the city on conceptual, aesthetic, and philosophical levels. The artists involved with this project all work with sound in conjunction to place, not space. They consider context as key to understanding meaning, and the social, as central to artistic creation. Translating invisible signals that we are constantly bombarded with into experimental sound ; researching a city by wandering and recording its unique tonal timbres ; translating city noise into experimental electronic works; documenting curfew quietude in our current pandemic ; re-imagining city soundscapes with technological innovation ; studying the communication of drivers in Cairo – these are all strategies by our grouping of artists to unpack the layered and dynamic impressions sound provides us with in daily life and, in turn, offer re-mixed alternatives.