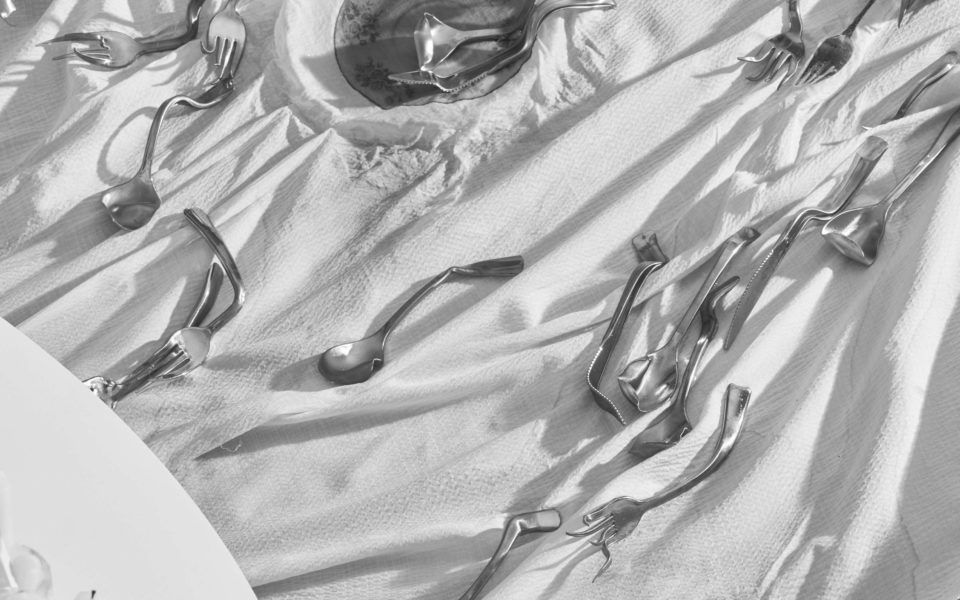 We are launching here a series of conversations. We will discuss the fashion industry and education, and look at how changes in the industry – and fashion more broadly – impact the way we engage with fashion as educators. These conversations are held informally over lunch between HEAD fashion tutors and the practitioners invited to lead workshops.

For our first conversation, we sat down with the editors of Periodico Magazine, photographer Marc Asekhame and graphic designer Teo Schifferli. Marc and Teo were invited by BA2 tutor Emilie Meldem to collaborate on a scenography workshop, which resulted in an event, two publications, a short film and scenographic elements, of which a selection of images are shown below.

A: You start Emilie and set the scene. How did this project come about?

E: Students work on personal projects for most of the year, but these projects are then shown together as a group on the runway. So I am always trying to find a way of bringing their work together and for the students to be involved in producing a collective identity. On the side, I was having these conversations with Marc about his work, and I was planning on inviting him at HEAD for a talk. The invitation morphed into a full-blown workshop project, and we came up with this idea of creating a collective identity through an event – a dinner party – which would then be documented and lead to the final show scenography.

M: It was quite vague at the beginning, but basically, the goal was to create circumstances from which a collective identity could be drawn.

A: Is this the first time you are experimenting with this type of project?

M: Yes, it is the first time in the context of a school, with 20 people. But I think the way I work and how we work with our magazine, Periodico, is quite similar. We don’t want to impose a topic for the magazine, it is rather about proposing a format and then inviting people to work within that format.

A: Tell us more about Periodico. Why did you decide to launch a magazine?

M: I founded it in 2016 just out of dissatisfaction with other magazines and their hierarchical structure. I think for photographers magazines are (still) an important format, and I was interested in creating my own distribution system. I wanted to create a sort of framework and then work within it as an editor but also maybe as a participant and as someone who learns from it. Print is also a historical format, there is a lot of nostalgia involved in it. It is a luxury to print books and print magazines. Today, maybe because of economic pressures, commercial magazines all seem to be disseminating the same content.

T: Magazines are commercial of course. For us, it was more about creating a platform to distribute our own ideas. For me, it was difficult because I mostly design books. It functions really differently: content production is fast-paced and very specific. A magazine reacts to what is happening now.

A: So, you are not working against the fact that it is ephemeral. You work with and within the parameters of a magazine.

M: I think this is how our advertisements have come about. We produce our own ads as a series. Advertisements are a defining element of magazines. Our goal was to actually control the ads. We don’t make a bold statement through the content, but through the circumstances we create. The circumstances for production become content – which is created before the final product exists.

T: The magazine would not exist without advertisement.

A: If you think about the history of fashion, some of the iconic images are advertisements. It feels, in the context of fashion photography, like a medium in itself.

M: Yes, definitely! I look at advertisements all the time. There is a lot of information contained in advertisement images as they are bound to the times they exist in.

A: There is a parallel between the workshop and the magazine.

E: It’s this idea of creating a structure that allows for a certain amount of freedom. We don’t have control over the content which is produced beyond setting the framework for it to be created collectively. It is something that has interested me for some time…it is an attempt to work more horizontally.

A: On this idea of collaboration and collaborative content – do you think that this is particularly important considering fashion education’s emphasis on the self, on the need to build one’s own “universe”?

E: I think it is something important in general. Not specifically for fashion. Fashion actually involves working with a lot of different people.

M: I think it is a particular skill you have to have in fashion. Fashion is always a thing you can work on individually but which exists within a system. So you have to juggle the system around you.

E: I think it is interesting how collaboration can happen quite naturally. In this case, the best ideas imposed themselves almost effortlessly. In the beginning, we were giving specific inputs which the students then implemented…but they quickly started making decisions of their own, as a group. The workshop is also really about experimenting with ideas through making. This is something you have to do all the time in fashion since production takes up so much time.

A: The fact that you are working across different mediums is interesting – the performance/event, two publications and then finally the runaway (to come) – different contexts, different content.

T: The tablecloth which the students will turn into an object for the fashion show’s scenography works as a link between them.

M: What do you take from these circumstances? What content do you extract? These were important questions.

E: Yes, how do you control something you can’t initially control? And how do you hang on to the energy of the event and translate it into objects? How do you maintain a (collective) identity across different contexts? It is a real challenge.

T: It was a similar challenge with Periodico. To invite people to contribute to an issue without providing a specific topic for the contributions…you run a risk.

E: There is a risk of losing your identity.

A: Do you use the magazine to show your own work?

M: We work as editors mostly. If we produce something for it, it is not our work in a sense, we apply the rules of the format, the rules that we have set ourselves. I shot the ads for the second issue, but I don’t consider it my work it is more the way I engage with the magazine as an editor and photographer.

T: You have to define some rules to create an identity. We never use an image on the cover, for instance. But we ask contributing artist to make editions to support the magazine. These are initially published in the magazine as “proposals for future covers”. We don’t have a cover but exploit the possibility of having one.

T: An image is too branded…

M: No image, No logo…the typeface changes for each issue. There is not really a graphic identity.

A: Paradoxically, this idea of having no identity bred one of fashion’s most iconic brands.

M: Margiela has been really influential in recent years for brands launching as collectives maybe not primarily for his design work but for how he built his brand. I read this interview of Telfar recently, and he explains how they pretended to be a brand until they actually were a brand.

A: This idea of performing a brand identity – it works as a critique but also perhaps renounces the possibility of producing anything meaningful beyond commercial validity. If fashion is primarily lived/performed through images today, is this idea of image-making which is inherent to fashion both in garment-making and actual image making, an even more crucial aspect of fashion production today?

E: You can produce poorly made clothes but be really strong at image-making. But it is not necessarily because you have a big image that you sell. It is not the same thing at all. You would be really surprised…sometimes brands that nobody knows actually sell really well.

A: Marc, in your email exchanges with Emilie, you mentioned this idea of criticality, of hanging on to it even in the context of commercial work. What is this criticality precisely pointed towards?

M: In my case, it is very much about laying bare the structure of what I am doing. So when you shoot fashion, you have to be clear about what you are doing because often times, fashion or commercial images avoid directness. They try to sell more of an idea, or they try to access the customer through emotions by producing an affective image. So for me, it is quite interesting to lay bare the production circumstances under which a fashion image is created.

A: Yet at times, fashion photography is so overdone that its artificiality is kind of inherently signified by its extravagance. It is literally an image-fiction. Building on this, what is your relationship to this idea of authenticity? Can we still hang on to a term like “authenticity”?

E: For me, it is not just about fashion. It is a general question. Authenticity can be manufactured, and objectivity in a way can never be fully achieved. So what you need is a form of transparency.

A: It is this idea of disclosing the position from which you speak. I guess fashion photography comes dangerously close at times to producing universal standards as opposed to “situated” images. This is when, I guess, revealing how these standards are created becomes essential.

M: Was fashion ever diverse? The topic of diversity has been sucked up by commercial images. I am not sure it has changed something. The idea of a democratic, diverse audience or industry can be very fraudulent, I think.

A: Can fashion reach beyond in its own scene? Can new forms of engagement be created?

E: This emphasis on having to produce something new creates a dynamic which is all about the choc effect. For me, that is problematic, especially if it is done for commercial purposes.

T: Image-making has become more conservative, I think. In part because there are a lot more people involved today in image production. In the ’90s, you went directly to the photographer. Now all these marketing people have to approve an idea.

M: What seems radical in a sense today is that you can buy Ottolinger on Chinese counterfeit markets.

A: The DIY/craft movement that you find on Instagram is also quite fascinating in that respect. It is cheap, charity-shop fashion that allows people to experiment with fashion in new ways.

A: In fashion, this idea that creativity has to come from your “guts”, from your inner self has been quite widely promoted. What are your thoughts on this?

E: I disagree with this view. Being creative is something you can learn. In a way, it is less about the result than the process.

T: One of the best moments in art school was when I realised I didn’t have to reinvent the world. What I needed is references, the more and more I looked at books, the better I could solve problems.

M: I would argue that good work doesn’t necessarily need to be personal. In my case, my best work is always personal. If I shoot an editorial for a magazine, and there is this underpaid model, and I have to pay for the whole production, and I am doing that to promote myself, it is interesting for me to try and translate this position I am taking up.

E: For me, you can make something personal that has nothing to do with yourself. To know why you are doing something is really important, in that sense it should be personal, but you don’t have to make it about yourself.